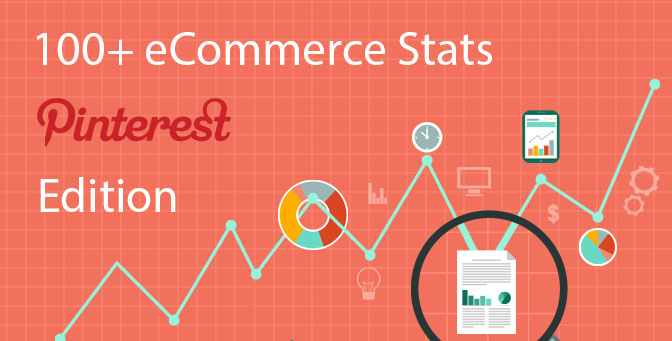 For our first article on the eCommerce Weekly Stats series, we’ve decided to cover Pinterest, since it’s one of the most efficient & lucrative (not to mention fun) social media channel for eCommerce businesses. Although focused mainly on eCommerce, you will find many more stats that can be useful for other online businesses.

As a visually focused platform with an incredible growth rate, it’s only natural that Pinterest would succeed in becoming a growth channel for many online stores. The benefits of optimizing your online presence for Pinterest abound and using it is rather straightforward.

We’ll start off with very specific eCommerce related statistics and then we’ll cover some general & demographic stats we’ve extracted from various sources & case studies. Feel free to jump ahead at:

Disclaimer: I’ve put together and commented on the stats that offer different values on the same topic/indicator as opposed to “ah, this says 22% and it’s from 2009. Good enough.”

Let’s start with what’s on every eCommerce marketer’s mind: how much are Pinterest users spending? Well, there are many different stats on this, but they’re not shockingly different:

Pinterest users tend to spend more than those coming from other platforms, with average order values of $123.50 versus Facebook users’ $54.64. Source: WGSN

I’m still looking for fresh data on this stat, but I’m pretty much betting that the average is much lower in 2015, with all the brands competing now for Pinners’ attention and time.

On to the second question on your mind: how much traffic can/does Pinterest generate?

In most cases, a Pinterest pin can drive visits for months, as opposed to Facebook and other feed-focused services. Source: TechCrunch [2013 data]

About 5.5% of the traffic is going to Etsy (in comparison, 0.5% is going to Amazon). After Facebook, Pinterest is the top referring social network for Etsy. Source: SimilarWeb [2013 data]

Pinterest’s share of referrals is highest in home and furnishings, accounting for up to 60 percent of all social traffic. Source: Rich Relevance [2013 data]

13% of all outgoing traffic from Pinterest leads to shopping websites. Source: SimilarWeb [2013 data]

Only 7% of all clicks on pins lead to a store or shopping page.

The Pinterest bounce rate is also extremely low, at only 37%. Source: SimilarWeb

To be honest, I thought Gigya’s stat is way off at first (plus, it’s somehow based on social logins), but when you come to think about it – they work with over 700 leading brands, including Microsoft, Forbes, Pepsi etc. So they’re not working with a “limited audience”.

In conclusion: Pinterest drives a lot of traffic. But no one can say for sure how much, except maybe Pinterest (and they haven’t released official stats on this – correct me if I’m wrong please).

Pinterest was the leader in social media in terms of retail conversions in the past 2 years. Source: Adobe Digital Index [2014 data]

Pinterest users are 10% more likely to buy (compared to other social traffic) and usually spend twice as much. Source: Shopify [2013 data]

Conversion rates for Pinterest traffic are 50% higher than conversion rates from other traffic sources and Pinterest is the top converting social media site for “Top of the Funnel” advertising. Source: Venture Beat – Indigo Case Study

While we can’t pin a number on average conversion based on reports available, it’s quite clear that Pinterest traffic is likelier to convert compared to other social traffic.

51% use Pinterest to connect with people who have similar styles and interests.

70% use Pinterest to get inspiration on what to buy.

The last stat should motivate you to integrate the latest content marketing best practices into your social media marketing efforts.

How much do they actually engage with brands and their products?

11% have looked at or claimed coupons or specific sales.

23% have searched for a specific retailer or brand on Pinterest.

36% have browsed pinboards created by retailers or brands.

37% have pinned an item from a brand or retailer’s website.

55% have repinned an item representing a product and/or brand related image.

This data was taken from a Business2Community infographic, compiled by OmniCore.

Some other interesting stats include:

38% of active users have purchasedonline or at a traditional retail store because of something they saw on Pinterest. Source: Ahalogy [2014 data]

53% of daily users have purchased online or at a traditional retail store because of something they saw on Pinterest. Ahalogy [2014 data]

47% of U.S. online consumers have made apurchase based on recommendations from Pinterest. Source: BlogHer [2012 data]

95 percent of pins are going to boards that are named after categories, Piqora says, and five percent are going into explicitly commercial boards with titles like “I want this” and “My dream list.” Source: Curalate [2013 data]

Followers of brands are 52% more likely than the average adult to download a web coupon and 9% more likely to shop online. This includes Pinterest followers.

The average US Pinterest user follows an average of 9 retailers on the site.

70% of brand engagement on Pinterest is generated by users, not brands. Source: Digitas [2013 data]

In fashion and retail, 18% of content engagement on Pinterest is driven by brands, 82% by community. Source: Digitas [2013 data]

Top brands in the fashion/retail space average 46 repins on every pin, proving that those who have a presence on Pinterest, are establishing an engaged following. Source: Digitas [2013 data]

Pinterest pins that include prices receive 36 percent more likes than those that do not. Source: Shopify [2012 data]

69% of Pinterest users have found at least one item that they’ve bought or wanted to buy. Source: PinterestInsider [2013 data]

Red images get more repins than primarily blue images, and pictures that contain a mixture of red, orange, and brown, oddly enough, are repinned twice as as often as blue images. Source: Curalate [2013 data]

Imagines with less than 30 percent background are repinned most often, while images that contain 40 percent or more background are two to four times less likely to be repinned. Source: Curalate [2013 data]

48 percent of the most popular pins lead to expired pages on retailers’ sites. Source: Curalate [2013 data]

Pins that also include prices will receive 36% more likes than those which do not.

Pins related to trending topics will see an average increase of 94% in click throughs.

Vertical images with an aspect ratio between 2:3 and 4:5 get 60% more repins than very tall images. Source: Curalate [2014 data]

Some of the stats on Pinterest and holiday shopping are absolutely mind boggling:

There are over 2 million users that save products to boards DAILY. Source: Pinterest [2014 data]

The following stats are from a small research (500 people questioned) done by Lab42 (a market research firm), but the results are in line with many other stats I’ve run into and they’re useful nonetheless. You can check out their infographic here

54% used Pinterest more frequently and 52% used it longer during the holidays.

59% have bought something they saw on Pinterest during the holiday season.

19% have reported spending more during the holidays because of Pinterest.

Of all Pinterest users, 53% use their phone as the primary pinning device, 25% use their desktop and 23% use their tablet. Source: eMarketer [2014 data]

Mobile takes up to 93% of all the time spent by users on Pinterest. Source: eMarketer [2014 data]

More than 60% of eCommerce shoppers use social sites and tools to interact with brands.

Retailers that provide people with engaging, digitally-enhanced experiences can expect in-store sales to increase by as much as 40%.

Pinterest is the top channel for iPad with an almost 50% share of all social activity on the tablet.

The most trustworthy stats on Pinterest demographics come from AcuPoll Research. They’ve done a detailed research in March 2014 for Ahology. Later on, I stumbled onto some great Pinterest comsumption data from Ahology (you need to subscribe to their newsletter to access it) that covers 2014 Pinterest consumption habits extensively.

The main question here is…how many users does Pinterest have?

Pinterest won’t give a number, but most estimates and studies show it has around 70 million users. My bet is that it’s going to break the 100 million barrier in 2015.

So, let’s start with the important stats:

As mentioned before, you can expect male users signups to outpace female user signups at least until 2016. Pinterest is pushing hard to make the network much more relevant to the male audience.

Let’s dive in some more specific demographic stats that can help you model your strategy:

When it comes to emerging markets, Pinterest is seeing an even split between male and female signups. Source: TechCrunch [2014 data]

Women on Pinterest are 33% more likely to have bought consumer electronics in the past 6 months. Source: MobileMarketer [2013 data]

There were some stats that didn’t quite fit in the above categories, relating to user activity such as:

There are more pins than there are people on Earth. There were over 30 billion pins on Pinterest by the second half of 2014. Source: TechCrunch [2014 data]

84% of women signed up on Pinterest stay active on it. Source: Forbes

50% of men signed up on Pinterest stay active on it. Source: Forbes

Female users have an average of 158 pins. Source: Digital Insights

92% of Pinterest pins are done by women. Source: Digital Insights

A pin is repinned (a form of sharing) 10* times on average. For comparison, the average tweet on Twitter is only retweeted slightly more than 1% of the time. Source: Piquora [2013 data] *11 as reported by Pinterest in 2014

Less than 1 percent of posts on Pinterest have a negative tone.

We’ve got many more networks and channels to cover in the following weeks, so feel free to subscribe to our newsletter to get the next posts in the series. Also, we’d appreciate if you’d share the post or tell us in the comments what you’d like to see next (or how we can make these posts even more useful to you).